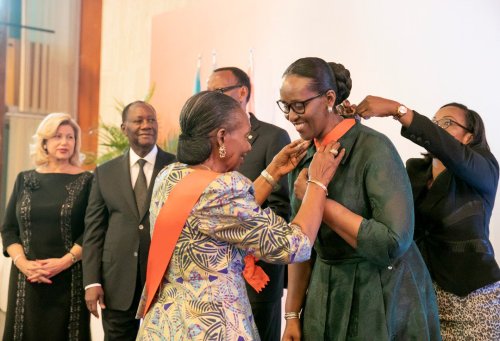 December 2018 Special Ambassador for Adolescent Health and Wellbeing, as appointed by UNAIDS, in Kigali, Rwanda, for the First Lady’s unwavering commitment to uplifting the lives of adolescents, via HIV/AIDS prevention and treatment, along with youth empowerment.

September 2018 The African Women of Excellence Award, received at the Women of Excellence Awards Gala Dinner in Johannesburg, South Africa. The awards are an initiative of the African Union Commission and the African Diaspora Forum, which recognizes Women of Africa and African descent, for their contributions to success in the struggle for freedom, development, and peace; and independence in political, social and economic spheres throughout the world.

November 2017 African Woman Personality of the Year and African Heroine Award, given by the Dutch-based The Voice Magazine, for her active, relentless and passionate devotion to uplifting the lives of vulnerable people in Rwanda.

May 2016 Team Heart Humanitarian Award, given in Boston (USA) at the fundraiser for the first Rwandan cardiac care center, in recognition for her work and dedication to impacting marginalized communities.

March 2016 Award for Fighting Gender-Based Violence and promoting Women Empowerment, given at the 5th Kigali International Conference Declaration (KICD) General Assembly, held in Algiers (Algeria), in recognition for her initiated range One Stop Centre, to holistically prevent and respond to GBV.

May 2013 Outstanding Global Leader award in recognition of her contribution to promoting the rights of women and girls by Women Inspiration and Enterprise (WIE), a global movement conference and community for women, in Cape Town, South Africa.

April 2010 Honorary Doctorate, Doctor of Laws Honoris Causa presented at Oklahoma Christian University for her significant contribution to the worldwide fight against HIV/AIDS and poverty.

June 2009 UNICEF Children’s Champions Award, presented to H.E. President Paul Kagame and First Lady Jeannette Kagame by the U.S Fund for UNICEF in Boston, in recognition of their efforts at improving the lives of children in Rwanda.

December 2008 Malayika Murinzi Award presented in Kigali by 1,000 children under the Imbuto Foundation’s Scholarships Programme, in recognition of her role as a ‘guardian angel,’ the English translation of MalayikaMurinzi.

January 2007 John Thompson ‘Legacy of a Dream’ Award on Martin Luther King Day, in recognition of the groundbreaking “Treat Every Child as your Own” African First Ladies’ Campaign, at the Kennedy Centre for Performing Arts in Washington D.C.

March 2003 International AIDS Trust Award presented in Washington D.C by Senator Hillary Rodham Clinton, in recognition of her innovative efforts in turning around the HIV pandemic.

December 2001 UNAIDS Award presented in Geneva, UNAIDS headquarters, in recognition of her untiring efforts in the fight against HIV/AIDS.